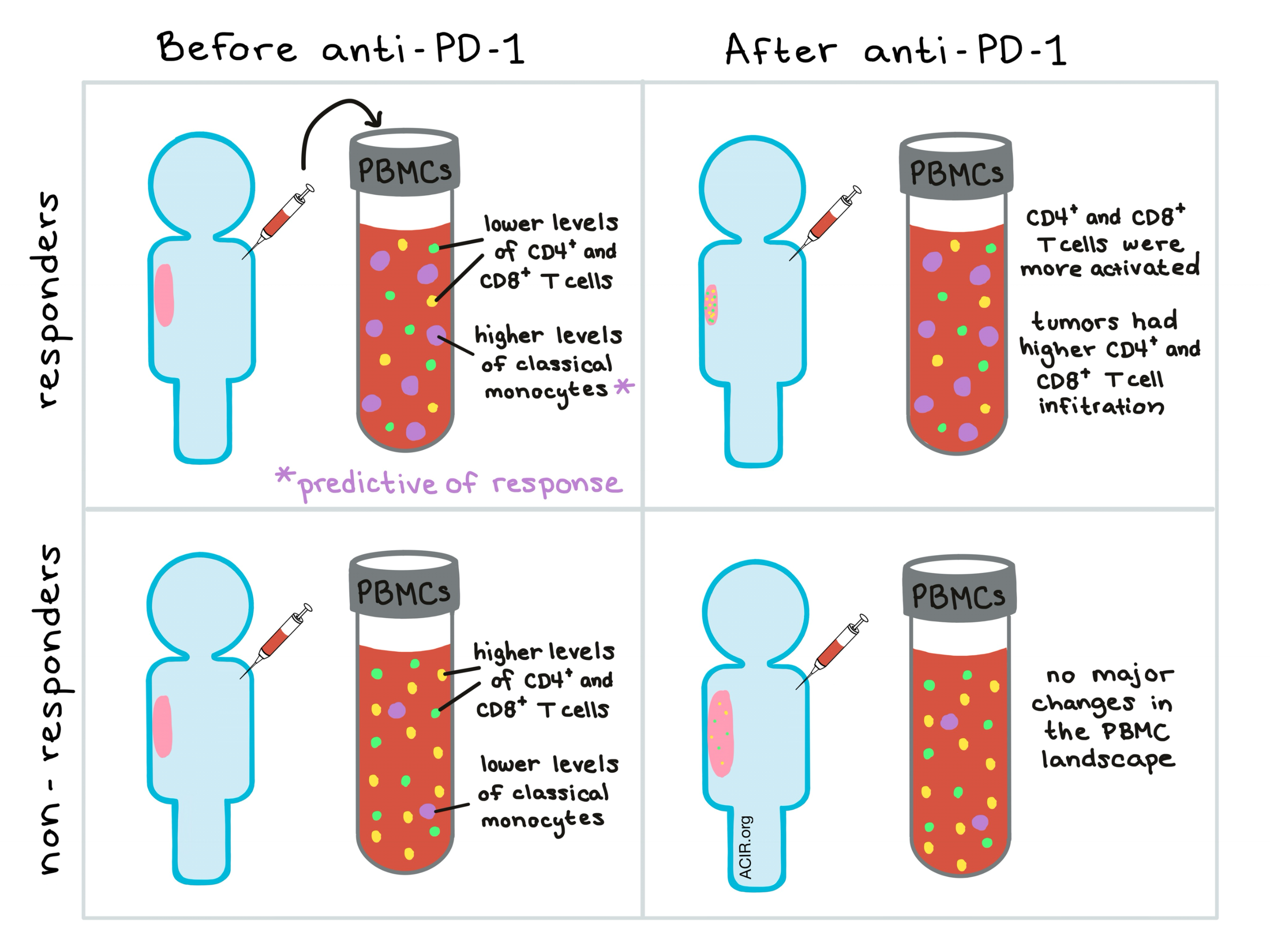 Anti-PD-1 therapy has been clinically effective against a wide range of cancers, but still only a fraction of patients achieve a durable response. Researchers have been on the hunt for biomarkers that could predict which patients are likely to respond to this therapy, and Krieg et al. may have finally found their mark. The team utilized peripheral blood mononuclear cells (PBMCs) from samples from twenty patients with metastatic melanoma before and twelve weeks after the initiation anti-PD-1 immunotherapy to compare responders and non-responders. They used high-dimensional, single-cell mass cytometry with three optimized immune marker panels and several bioinformatics tools to identify differences between responders and non-responders to anti-PD-1 immunotherapy.

In an initial ‘cytometry by time of flight’ (CyTOF) analysis of patient PBMCs, hierarchical clustering by marker expression on all leukocytes in each patient before and after therapy stratified patients into responders and non-responders, indicating a possible pre-therapeutic biomarker. Analysis of the first cyTOF panel revealed that responders had lower frequencies of CD4+ and CD8+ T cells and higher frequencies of CD19–HLA-DR+ myeloid cells in the peripheral blood both before and after therapy.

While the lymphocyte landscape provided some insight into patients’ responsiveness to anti-PD-1, it did not provide any robust predictive biomarkers. As earlier results from the CyTOF analysis indicated higher levels of CD14+ myeloid cells in responders before therapy, the researchers performed an in-depth characterization of the myeloid cell compartment with a third ‘myeloid-centric’ CyTOF panel. Unsupervised clustering of marker expression again stratified the patients and led to identification of 16 markers that were upregulated in responders compared to non-responders. FlowSOM analysis confirmed the elevated levels of classical CD14+CD16–HLA-DRhi monocytes in responders and implicated this signature as a robust predictive biomarker of responsiveness to anti-PD-1 immunotherapy. RNA sequencing of myeloid cells revealed no major differences in function, phenotypic state, or polarization of these cells between responders and non-responders, indicating that the frequency of CD14+CD16–HLA-DRhi cells in circulation before therapy was the most important factor to consider as a predictive biomarker.

To make their analysis process simpler for clinical translation, the researchers designed a flow-cytometry-based validation panel using fewer markers and curated combinations of markers that confirmed prior observations of lower T cell frequencies and higher CD14+ monocyte frequencies in peripheral blood of patients who would respond to therapy. Finally, they assessed the prognostic value of the frequency of classical monocytes in peripheral blood and found that the frequency of classical monocytes was robustly associated with progression-free and overall survival in response to anti-PD-1.

While no mechanistic studies were performed, Krieg et al. did speculate on what the mechanism might be based on their data. They propose that in patients who would ultimately respond to therapy, T cells are low in the peripheral blood because they have superior migratory capacity and have already begun to move out of the blood and into the tumor, producing IFNγ that could trigger the release of myeloid cells from bone marrow and support their expansion. Whether the expanded myeloid cells actively contribute to sustaining the immune response is uncertain. Determining whether this presumptive mechanism is accurate will require significantly more testing.

In addition to experimentally exploring the mechanism, the researchers intend to study whether the response-associated immune signature identified in this study will hold true in larger cohorts and across a range of other cancers. If so, a prediction signature based on the frequency of classical monocytes in peripheral blood might be used in clinical practice to tailor the application of anti-PD-1 immunotherapy to those who are most likely to benefit from it.

We don't find any widget to show. Please add some widgets by going to Admin > Appearance > Widgets and add widgets in "Right Sidebar for Blog" area.